Dominic Rivard, is a winemaker with a specialty in fruit winemaking, cider and mead making. He is a consultant and the author of the The Ultimate Fruit Winemaker’s Guide, this blog and involved in the wine industry as an award winning commercial winemaker. Throughout his career, he has been passionate about wines, especially of the “non-grape” variety.

With over 25 years experience in the wine industry, Dominic has been involved with wine from the age of 17 when he started making wine from local fruits and grapes in Canada.

After becoming a qualified sommelier, he studied advanced winemaking and oenology by undertaking and passing the Wine and Spirit Education Trust (WSET) Higher Certificate with distinctions. He is now studying towards the prestigious Master of Wine accreditation.

He is a founding director of the Fruit Wines of Canada Association, which was involved in promoting wines and its industry throughout Canada.

Over the last decade, Dominic has been busy running numerous wine production and exportation projects with wineries and wine importers/distributors in Canada, USA, Italy, Spain, Chile, Taiwan, Korea, India, Japan as well as China. He he is a speaker on the subject of fruit winemaking, cider and wine marketing at various symposiums throughout the world. 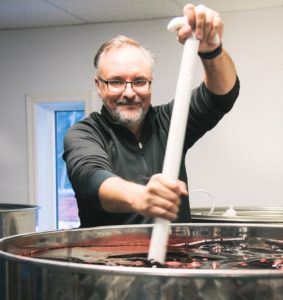 In Canada, Dominic has been engaged in R&D projects for the government of Alberta and New Brunswick and has perfected numerous dessert wine production techniques including iced fruit wine cryo-extraction. He specializes in cider, fruit wine, dessert wine and ice wine production and is known in wine industry circles as an authority in fruit wine making.

Dominic has been active in the burgeoning Chinese wine industry as consultant winemaker, wine judge with the China Fruit Wine Association as well as Chief Winemaker and for Tonghua Winery, the fourth largest winery in Asia, situated in North East China.

Dominic has also been involved in running the fruit winemaking production of a high quality tropical fruit winery in Thailand and the research and development of wines and other alcoholic beverages using tropical fruits and herbs.

Presently, Dominic is based out of Nova Scotia, Canada and has taken up sustainable and organic fruit growing, is an active speaker at wine symposiums throughout the world and continuing to assist wineries, cider and mead producers with their production on a consultant basis.

He is enthusiastic about the developments in the fruit wine industry and its great potential not only locally but on a global basis.

Dominic is available for on-site consultation or off-site assistance via phone, email or video consultation.

Contact him and let him know about your wine, cider or mead project, perhaps there is a way for Dominic to be able to help!

Contact Dominic for any Wine, Cider or Mead consultation you need!

WinePlanet Consulting, is a wine consultancy agency specializing in fruit wines, cider and mead with offices in Canada and India to service the wine industry globally. Contact WinePlanet with any assistance you need for your next wine project!

Tweets by @djrivard
Interested in the Ultimate Fruit Winemaking Guide? Get it here:

Dominic can be reached for consulting projects at: