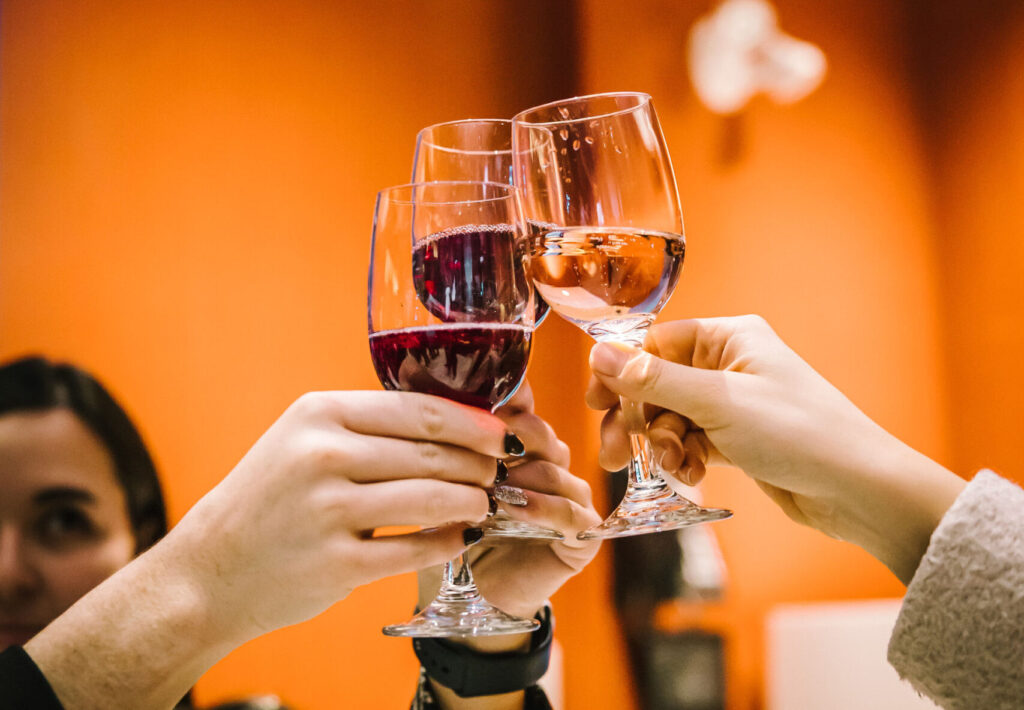 In the spring of 2022, I received a message from a friend and sommelier, Tammy Brideau, who invited me to contact a group of investors who were planning to launch new wines made in New Brunswick. After a few exchanges with the director of the Coopérative forestière du Nord-Ouest, Guy Paillard explained to me the company’s desire to commercialize wines made from camerise at its Clair facility.

I was then invited to join the wine tasting, in order to allow the calibration of the recipes that would give birth to these first wines of the NOASKA line. In fact, the name NOASKA comes from the first two letters NO, which situate the geographical location of the North-West, and the letters ASKA refer to the regional origins in Madawaska, as well as to the consonance of haskap, also called honeyberry in other regions.

It was in May 2022, in a room at the CCNB in Grand Falls, that I met up with a few invited guests, including my sommelier friends Claude Mercier and Tammy Brideau.

We met Mike Doucette, a researcher and chemist at the CCNB, and Dominic Rivard, a winemaker and wine consultant for over 25 years. He is the author of a book entitled “The Ultimate Fruit Winemaker’s Guide“. The winemaker Stéphane Nadeau is also part of the event.

The exercise seems to me at first sight a bit audacious, while the promoters clearly express the wish to create wines from a marginal fruit that will compete with those traditionally made from grapes.

The goal of the venture

After tasting the first samples, the verdict was unanimous: the challenge is possible! Seeing my interest in the future, I am then convinced that this project also needs a distinction in terms of communication. My two hats will therefore cohabit in the NOASKA project. Le Tire-bouchon Griffin for the wine aspect, and FineGriffe Communication to tell the story and create an image and branding that leaves its mark.

The label wine an element of distinction

It was during the label design process that the awakening became even stronger with the meeting of my marketing colleagues, including Jacques Rousseau, from Productions Rouj, and Dominique Babineau, from DB Solutions Marketing.

My conviction was quite simple: for a wine to stand out on the shelves among hundreds, even thousands of labels, it must stand out in originality and display a unique character. A fruit wine is unique, but it must also appeal to those who shop with their eyes.

Often you hear people say, “I bought this wine because I thought the label was beautiful.” It is these comments that encourage me to take this approach to the NOASKA project. Guy Paillard added philosophically, “We will sell the first bottle for the label, but the second for the taste.”

“My belief was quite simple: for a wine to stand out on the shelves across hundreds, even thousands of labels, it must therefore stand out in originality and display a unique character.”

After a few weeks in June, the first drafts were developed. Now it’s time to test our theory, and that’s how Dominique Babineau comes into play to gather NOASKA’s target audience: young wine drinkers aged 19 to 39.

The wines pass the youth test

A focus group was organized in Edmundston to bring together a few young people to expose them to our label choices and to have them taste the wines so they could give us their impressions. They knew it was wine, but we voluntarily hid the fact that it was made from haskap.

The verdict was once again unanimous: the young people were adamant that they liked the wines. “We would gladly buy them if they were ever on the market”, as they described in the comments of the questionnaire we had prepared. For the labels, our intuition was right, but one element stood out. In these exchanges with our focus group, they said that originality must come first, but they also wanted to find a meaning, a story. 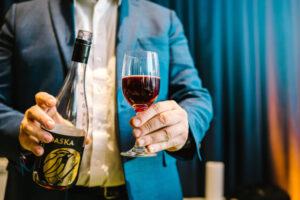 After this evening, I did not fall asleep quickly. I had to digest everything and think about this dimension of the story to tell. Our team once again rolled up their sleeves and, after finding the story angle, went back to the drawing board. On the basis of new texts and with the help of Théo Paillard (Guy’s brother) we gave birth to the characters that will shape the story we are trying to tell. Jacques Rousseau came back to the charge with what will become the concept of the labels.

It is while going back to the basics, that inspiration struck me regarding the details of this story. Forest producers, haskap orchards in a rural environment in Clair, New Brunswick. Here, it’s nature speaking, so we’re going to let nature speak. In fact, the slogan that will be used to promote this line was easy to establish: NOASKA, good from nature!

After some research, we have dedicated our interest to the living creatures we encounter in the haskap orchards. There are those who enjoy the fruits of the orchards, and there are those who hunt the small rodents and insects that gravitate in this environment. Thus, the four wines will now be personified by these representatives of the animal kingdom. If Disney did its marketing with a mouse, NOASKA will have the support of two birds and two mammals.

The four symbols of NOASKA

A call of nature! A dry red with panache, Baker Buck loads your taste buds for pleasure.

The trick is grand! Master Fox, in his settled orchard, held a haskap berry in his beak… and gave birth to a new fable. A rosé that will bring your personality out of its burrow!

It’s great to get together with friends and sip our sparkling rosé! A wine that will please even the fussiest of palates.

Like Jazzy the Waxer, you’ll take flight while enjoying the effervescence of the moment! This wine is a rare bird and after a few glasses, you’ll be a little more talkative.

This is how this project gave me the chance to put my two passions into action. Wine and communications form my DNA and I would like to thank Guy Paillard and his board of directors for this opportunity and for the confidence they have shown throughout this adventure. This is without counting all the collaborators like Jacques, Dominique, Théo, Emmanuelle, Michael, Dominic, Paul and Stéphane. Nothing has been neglected so that NOASKA can continue its story.

It is important to support our local businesses. Drinking and eating locally are more and more reflexes that consumers are adopting. And when it’s good natured, it’s even easier