Banana wine is one of the fastest growing processed products of banana to enter the market in Africa. Like any new product, finding a niche market for banana wine is a challenge—but not in Malawi or Tanzania, where the several enterprises making such wines have proven to be a very lucrative market. 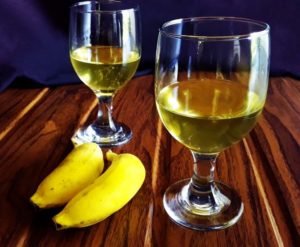 “After we processed the banana wine, we were thinking who would buy it, and then we observed that the wine is used traditionally as home brew, and so we thought, why not sell it to people?” Victor Mshani, a banana researcher in Malawi shared during the First Global Banana Uses Enterprise Workshop and Technology Fair held recently in the Philippines.

Malawi is not alone, nor is it unique. Elsewhere in Africa, up to 30% of the harvested banana fruits are squeezed to produce juice that can be taken fresh or fermented with sorghum flour to make banana beer and wine. In Tanzania, banana beer can be further distilled into liquor called ‘gongo’.

The idea of Rubisi (traditional banana wine) making in Tanzania has records of 300 years ago. It started with making of banana juice (Mulamba). Mulamba was becoming sour after two days and had no alcohol content. By that time farmers were drinking beer made from sorghum only and it was somehow bitter. After finding Mulamba been sweet without alcohol while sorghum was bitter with alcohol, farmers tried to make a balance by sweetening sorghum beer with Mulamba.

In the Ibwera village, the Rubisi is produced by majority of farmers. It was estimated that out of 745 households in the village, 50% – 60% make Rubisi.

1) Collect of fresh brewing bananas
2) Ripened over the rack or into ripening holes
3) Peeling of bananas before juice extraction (a long and arduous job)
4) Squeezing of bananas to extract juice in the canoe; Grass (hyperhenia sp)
used to separate juice from banana fresh. At that point the Fresh banana
juice (Mulamba) can be consumed fresh and sold.
5) Banana juice already mixed with sorghum (roasted or sun dried) flour
covered for fermentation. It is covered with banana leaves and waste (grass
+ banana fresh) to create temperature for 24 hours.
6) Banana beer (Rubisi) can be consumed fresh and sold. Some even drink it
from a gourd.
7) Rubisi is sometimes stored and served from bottles

Most of these banana juices or wines products are sold immediately after been produced. Mulamba can stay for the maximum of 24 hours if boiled. Rubisi can stay for 4 days. So the shelf life of the products is extremely low. This is mainly due to the total lack of technology in the production process and the low level of sanitation in the process of making the products.

In terms of sales, 15 – 30% of production is sold locally, in rural areas of banana production. The primary sites of sale are roadsides, local markets, village and urban beer clubs. The principal buyers are low-income people. Apart from those exposed at the local market or roadsides, business persons usually investigate and find out who has made Rubisi and usually selling in done at the farm gate. The chief competitors are industrial beers and soft drinks. Rubisi is a traditional drink used in all local functions such as payment of dowry, wedding ceremonies and funeral ceremonies.

Banana wine is certainly not for everyone but it is very interesting to see what a local culture typically drinks.