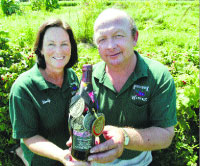 London, Ontario wine lovers who want to buy local don’t have to travel all the way to the Niagara peninsula or Essex County.

There are small grape and fruit wineries blossoming all over the north shore of Lake Erie and many more are ready to open.

The association’s website, www.realontariowine.ca, lists 45 wineries within 160 kilometres of London.

OVA secretary-administrator Larry Patterson said the virtual demise of the tobacco industry has opened up a lot of land potentially suitable for vineyards and orchards.

The OVA has about 100 members, including 22 still in the process of opening. OVA president Jim Warren said there has been a surge of interest from new producers hoping to ride the “buy local” trend.

“A lot of them at looking at their own backyard. They hope to draw local people,” said Warren.

But it takes years for new vineyards and orchards to get into full production.

Warren and Patterson said the new wineries are also facing an uncertain market because the system is tilted against small producers and local products.

The OVA says the market for domestic vineyards has been constricted because Ontario wineries established before 1993 are allowed to sell wine with 70% foreign grapes with the designation “cellared in Canada.”

“Government policies are largely set up to benefit the LCBO and a few large wineries,” said Patterson

He added that it’s difficult for most small wineries to compete for shelf space at the LCBO.

The OVA says producers of local fruit wines should have the right to sell their products at local farmers markets, a practice that is allowed in Alberta, New Brunswick, Nova Scotia and Quebec.

Last year, MPP Bob Runciman sponsored a bill allowing the sale of fruit wine in farmers market, but the bill has not made it past second reading because of lack of support from the government.

“There’s been a lot of push back. Everybody in government is looking at this as the first crack in the wall,” said Patterson.

That means many small wineries can only sell from stores on their own property or through a website.

“If you are in a really good location you’re fine. If you’re not, it’s murder,” he said

Quai de Vin is the most established small winery in the London area and has been working hard for 20 years to turn itself into a destination.

In the early 1970s Redi Quai, an Italian immigrant, decided to establish a vineyard as a retirement project on Fruit Ridge Line just north of Sparta.

Redi’s son, Robert, and wife Lisa established the winery in 1990.

Their son, Jamie Quai, is the third generation of the family to take on the business, after graduating with a specialized Bachelor of Science degrees in winemaking from Brock University.

“People are a lot more willing to try local products and it has made our job easier. With people staying closer to home, it’s been great,” he said.

Jamie said Fruit Ridge Line lives up to its name. The heavy clay soil is good for grape and fruit production.

“It’s a nice little microclimate for us. You can grow grapes anywhere along here, but there are few pockets like this that are great.”

Quai Du Vin has a 9.7-hectare vineyard and the winery produces about 35,000 litres of wine annually.

Most of it is marketed through the shop on site, but some is sold through local restaurants or shipped out on order. Quai said there are no plans to market through the LCBO.

“You have to be fairly large and jump through a lot of hoops. For a small winery, it’s not worth it,” he said.

He said Quai Du Vin has branched out to tourism and special events.

The beautiful grounds surrounding the vineyards have been equipped with a tent and a stage. The winery can host as many as 1,000 people for weddings, corporate events and an annual summer concert series.

Quai said pulling motorists off the highways to visit wineries on rural back roads is a challenge.

But he said the personal touch of small wineries impresses visitors and keeps them coming back.

“I’m the head winemaker and there’s nothing I would rather do than show it and sell it. If you get a lot larger than this, you’ll end up with high school kids showing you around,” he said.

Just east of St. Thomas, Walter Myszko is gearing up to produce his own grape wine from the vineyard he planted behind Meadow Lane Winery about five years ago.

Established in 1998, Meadow Lane mainly focuses on fruit wine made with produce purchased from local farms. He says that’s important to many of his customers.

Myszko agrees marketing through the LCBO isn’t practical for most small wineries, but selling through farmers markets would be a boost for his business.

“It would create an extra avenue for us. If I can open three little booths at the markets around here, we could move more product,” he said.

A few kilometres away near Aylmer, Kim and Wendy Flintoft have made Rush Creek Winery a favourite stop.

The Flintofts bought a former tobacco farm and started out making peach wine with fruit from their own orchard.

Over the years, they’ve learned to deal with the characteristics of each fruit. Their fermentation technique uses both juice and pulp to enhance the flavour.

Rush Creek has sold some wine through the Vintages section of the LCBO, but Kim said it is difficult to deal with the LCBO bureaucracy.

As with Quai Du Vin, most of the product is sold through the onsite store.

The Flintofts would love to sell their wine through farmers markets, but Kim is skeptical that small wineries have the political clout to get the law changed.

Visitors to Rush Creek can drink their wine at an outdoor lounge equipped with barbecues so they can prepare their own lunch or dinner.

Wendy teamed up with Shelley McVittie, who operates a nearby art gallery and gift shop, to produce a “back road” map listing of all the tourist attractions in their corner of Elgin County.

Fruit wines are often scorned for being too sweet, but Rush Creek’s best-selling wines are dry and Kim said customers are pleasantly surprised.

“Our tasting bar is the most important marketing tool we have,” he said.

The Flintofts are especially proud of Decadence, a strawberry-chocolate wine; Kim has spun his own creative legend about how the wine is produced by highly evolved honey bees from the nearby Clovermead apiary who mix cocoa powder with nectar from strawberry blossoms at G & M Howe farms.

A bit fanciful, but when visitors are served a sample of Decadence, it does serve to explain the alternating bursts of strawberry and chocolate.

“Isn’t that cool?” asks Wendy with a smile.

Article By: Hank Daniszewski and can be reached at [email protected]

One thought to “Exciting Times for London, Ontario Wine Lovers”