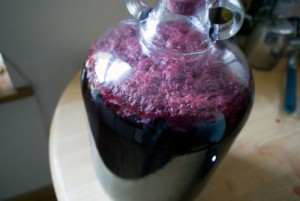 One of the hardiest, most adaptable plants on the planet, the humble elder tree has a delicious secret: the flower and fruit of this unprepossessing plant make a tasty wine. The fruit is often inedible, owing to its sharp, strong flavor: but when fermented and mixed with sugar, it reveals a darkly enchanting port-esque flavor reminiscent of blackberries. It’s a central ingredient in Sambuca, a name taken from its botanical nom de plume, sambucus negra (meaning blackberry). Elderflowers, conversely, have a lighter, more subtle floral taste, often compared to lychees.

Elderberries have been long prized in society: their remains have even been discovered in stone-age communities. The tree is surprisingly hardy, being native to temperature-to-subtropical zones the world over: plants are currently grown in such diverse regions as South America, the United Kingdom, Australia and Morocco, amongst many others. The elder genus is made up of 30 plants worldwide, the most common being sambucus negra (growing over Europe, North Africa and into Asia) and sambuca canadensis (in the United States and Eastern Canada). Seen as a sacred plant of healing by many indigenous tribes, the medicinal qualities of these plants have long been vaunted. Their properties have been written about by Pliny, Hippocrates and Dioscorides, extracts from the plant are still used by modern herbalists. Elder features in the oldest of British pharmacopeias, and is often used in drinks, healing poultices and ointments. An elderberry syrup might be taken before bed when suffering from a cold, to induce restful sleep, for fever or as an expectorant. A cough syrup can be made combining the berries with cognac and brown sugar.

Elder, particularly the fruit, has been used in wine for centuries, owing to its propensity to grow wild in great quantities. It was often used as a cheap alternative to importing wines from the continent, and is a popular choice for home wine-making enthusiasts, due to the ease with which it can be made. The flowers or fruit can be used as the central ingredient in wines or blended with other fruits for a refreshing twist. Elderberry wine is delicious taken as an apertif, owing to its simularities in flavour and consistency to port. The added benefit of making and drinking elderberry wine is its huge health properties. The fruit has some of the highest anti-oxidant or ORAC levels of ANY fruit. That alone is a great excuse to start making wine from it.

The lighter flavour of the elderflower, conversely, is best suited to blending with citrus fruits such as lemon, or pears. Elderflower sparkling wine is also very popular, adding a hint of floral sweetness in place of the tartness of grapes. In cocktails, it’s often pared with gin, the floral sweetness playing off the sourness of juniper berries to best advantage.

Not a significant commercial crop, Elder nonetheless grows wild throughout much of the world (avoiding equatorial and tropical regions), and can be found in hedges, woods, verges, gardens and thickets. It is extremely hardy, growing in all but very poor soils, including sandy and drought-stricken ground. Needing little upkeep and suffering from few diseases, it is very easy to cultivate, to the point where it is seen as a weed by many people. Seedlings can easily be started from cuttings of the wood, roots or suckers. The seedlings can be planted in fall or spring, and grow best in soil with a pH of 5.5 to 6.5. Plants in good soil can top 9 meters in height, though they are often kept as hedges. Plants are commonly self-fruiting but cross-pollination will improve their yield. Fruit maturity generally occurs from mid-August to mid-September. For more information on the cultivation practices of elderberries, see this excellent article courtesy of The Winemaker’s Mag.

Grated rind of one lemon
500mls (1 pint) of elderflowers – to obtain this pick or shake of the elderflowers
and place into a measuring jug. Don’t push them down but do shake them down. Be careful not to add any of the bitter green stems.
3.5 liters (8 pints) of boiling water
1.3kg (3 lbs) sugar Juice of one lemon
25g (Half an ounce) yeast

Put lemon rind with the elderflowers and pour over boiling water
Allow to stand for 4 days, stirring occasionally.

Strain through a fine sieve or muslin cloth
Stir in sugar, lemon juice and yeast
Keep at room temperature to ferment, try not to let it go down to 18c (65f)
When you are sure all the bubbling has ceased, stir the wine and allow to settle for 3 days
Strain again carefully
Put in a demijohn (not bottles)
After 3 months maturing, put into bottles.

You’ll find this wine is quite delectable, and infinitely easy to make. Don’t underestimate its potency, however: or you may find yourself in need of drink driving insurance!

Take care not to ingest the leaves, roots, stems and bark: they can be toxic, as are the immature green berries. Avoid making any kind of product from the American Red Elder: they contain a variety of cyanide, and as such are considered to be very toxic.

Hope you learned a bit more about elderberries and elder flower. Let me know of any experiences you have had making wine from them. I would love to hear from you.