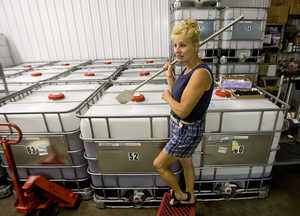 Article by Will Buss of bnd.com

Jody and Allen Justus have long enjoyed a bottle of homemade wine. Their good friend Arnold Schorr had always made it. But after he died seven years ago, the couple wondered how they would quench their thirst for sweet fruit wine. Jody decided to learn.

“I had to learn a lot about chemistry and do my homework,” she said. “I came up with what I think are some good recipes.”

Like a good wine, wine making takes time to perfect. Jody has spent the past seven years learning how to make sweet fruit wine from peaches, apples and blackberries.

In March 2009, she retired from the Belleville Post Office after 31 years. That July, she started making what would amount to 5,000 gallons of wine.

Now a year later, the Justuses have just opened their Jo-Al Winery and gift shop. Although located in a former mechanic’s garage on Illinois 177 at the east edge of Mascoutah, where the city meets cornfields, Jody and Allen Justus are seeing fellow wine lovers blazing a trail to their quaint confines.

“Those who walk in are pleasantly surprised,” Jody said. “We’ve had a steady stream of customers coming through. Just from one sign on the street, one of those stick-in-the-ground types, and one on the interstate. Some folks come in from the interstate.”

This new business, which held its grand opening last week, is another sign that wine making is thriving throughout metro-east and the rest of the state at a time when Illinois is struggling to pay bills, much less support its viticulture. Funding for the Illinois Grape Growers and Vintners Association has steadily fallen from the $550,000 that once was allotted to the nonprofit organization about five years ago.

The 2011 fiscal year budget finds the wine-making group on tap for only $150,000. Association external relations director Megan Pressnall said the latest squeeze came a year ago when full-time enologist Bradley Beam was cut.

But these cuts have not shriveled Illinois’ wine country. “It grows incredibly each year,” Pressnall said. “We now have 90 wineries in the state. Ten years ago, there were just 14.”

Judy Wiemann bought the Piasa Winery in Godfrey four years ago and moved it to Maryville last October. She reopened it under the same roof as her Villa Marie Vineyards and Winery, which she opened in November 2008.

“Our business is good,” Wiemann said. “We sell a lot of wine. Our wine is very good. We get a lot of traffic from Missouri.”

But as a winery, Villa Marie-Piasa Winery must file a form by the 15th of each month. This lets the Illinois Department of Revenue know the inventory on hand at the beginning of the month, what is manufactured, what is sold and the tax rate paid per gallon on what was sold. Last September, this tax rate increased from 73 cents to $1.39 a gallon.

“Things are tight, and the additional laws they have put in place, in my opinion, makes it harder for the small business person,” Wiemann said.

Jody Justus, whose husband’s cousin in St. Clair County Sheriff Mearl Justus, has a larger vision for her winery. Aside from the craftsmen and artists who sell their creations in her gift shop, Jody envisions becoming a link in a chain of businesses in her hometown that would promote commerce and tourism in the area.

“It’s all here all in our own backyard,” she said. “Our ultimate goal is everyone succeeds. We would really like Mascoutah to have more business, hire more workers in real estate and promote everyone here that we can.”

Jo-Al Winery has seven different wines made from fruit purchased from local orchards, like Braeutigam Orchards in Belleville, and the blackberries come from Hawkins-Schwartz Orchard in Dix, Ill., located near Mount Vernon.

Jody and her workers make it in the back of her 2,200-square-foot building in a space that is kept between 68 degrees to 71 degrees and at 50 percent humidity. Many state wineries like Jo-Al do not grow their own fruit but make in on site. The new Mascoutah winery cuts and crushes the fruit, and the juice is fermented in large polyurethane tanks. Jody and two employees have turned out as many as 600 screw-cap bottles in 10 hours.