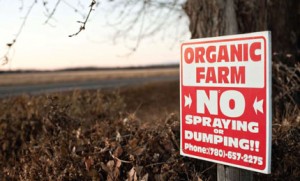 At the downtown farmers’ market on a chilly fall morning in Edmonton, Xina Chrapko is half educator and half gracious hostess to people who stop to investigate her products. The morning sun spills onto the bottles of colourful farm wines, often called “fruit wines,” that her family makes at En Santé Organic Winery: Saucy Saskatoon, Campfire Wild Cherry, Mellow Gold Honey and Green Envy (alfalfa – seriously). A couple from Regina listens to her intently, asking educated questions before laying down $50 for a couple of bottles. Later, an old farmer with some experience in rhubarb wine makes a purchase.

“We call it Calypso so it doesn’t remind people too much of the rhubarb wine their grandma used to make,” Xina says.

A few moments on, a young woman stops by and orders a bottle of Green Envy. It’s not her first. “It’s got notes of lime and fig to it,” Xina explains.

Maybe so. But it’s perfect for sipping with friends, the young woman says.

It took En Santé nine years of lobbying the Alberta Gaming and Liquor Commission (AGLC) for the right to sell its wines at farmers’ markets, a right that was finally granted to them this year. However, the journey that took En Santé there is many, many years longer.

The story of the Chrapko family farm is a slice of Alberta history. Xina’s grandfather moved to Canada from Ukraine as a child. In 1927 he set up a homestead on the lush land near Brosseau, just south of the Franco-Alberta heartland, an hour and a half northeast of Edmonton. In the 1970s, Xina’s mother and father, Victor and Elizabeth, took over the land.

“Dad was a visionary,” Xina says. “He told us we should try to leave the world a better place than when you found it.” Victor ran his mixed farm organically before people knew what that meant. In the 1990s, he started growing fruit for commercial purposes, no small undertaking in a Zone 2 agricultural area, which routinely sees winter temperatures plunge to -40 degrees Celsius. Victor consulted experts, experimenting with various cultivars.

Today, the 10-acre farm yields raspberries, strawberries, saskatoons, wild cherries and apples – 39 varieties – among other fruits. The rest of the farm is devoted to organic alfalfa fields.

“We started dabbling in U-pick,” Xina says, “but we had lots of fruit left over. There’s only so many pies you can make.” For Victor, the next value-added choice was obvious: wines.

He and Elizabeth started experimenting with recipes in 1997, and Victor started lobbying to have a cottage winery sanctioned by the AGLC. Success came in 2005; his winery, called En Santé, received the first provincial cottage winery licence, creating a nascent industry that’s gaining steam. Three years later, Victor was killed in a traffic accident. By then, he was already witnessing the emergence of fruit wines across Western Canada.

Other cottage wineries are now operating in Alberta, including Field Stone Fruit Wines in Strathmore and Chinook Arch Meadery near Okotoks, which offers honey-based fermented beverages. A couple of cideries are in the works. Fruit wine from makers in B.C.’s Okanagan Valley, notably Elephant Island Farm Wines, is likewise gaining a foothold, sold in such Edmonton liquor stores as Athlone Liquor Store and Aligra Wines & Spirits.

“I’ve noticed more action with fruit wines sales,” says Satesh Narine, who stocks En Santé products at Crestwood Fine Wines and Spirits. He attributes the interest in berry beverages to the recent AGLC rules allowing cottage wineries to sell their wares at farmers’ markets, putting them in front of buyers who have an interest in local and organic products. “They tend to be very approachable,” Narine says of the beverages. He suggests serving a fruit wine with one course in a meal to introduce wine lovers and everyone else to what the fields and farms of Alberta and B.C. have to offer.

Dominic Rivard, a fruit wine maker and product consultant who has worked with several of Canada’s 100-odd fruit wineries (including Field Stone), says fruit wines appeal to people who normally wouldn’t drink a grape wine or are new to the wine scene.

Purchases are led by women in their 20s to 40s, as well as the buy-local set. And awareness is growing. “In the mid-1990s, fruit wines were still thought of as something Grandma made in the basement,” he says. “The snobbery factor is dwindling.”

That’s music to Xina’s ears. “Our goal is to continue to produce high-quality, hand-crafted wines from organic products,” she says of the family business that she, her mom and sister, Tonia, run. In a way, Victor is still a part of the operation, too: “He always said, ‘If you’re doing the right thing, stand your ground.’ We want a product that people are proud to share with friends and family.