The young couple sold their Petawawa farm a year ago, and moved to their new farm, located about 40 minutes away from Sudbury, along with their one-year-old daughter, Vali.

There they’ve started up a business called Boreal Berry Farm and Winery, where they plan to make wine out of haskcap berries, sour cherries and Saskatoon berries.

They say it’s the first winery in northern Ontario, and the only haskcap orchard in Ontario.

They also plan to grow garlic, fruits and vegetables and produce eggs.

“The field, when we bought it, had not been taken care of at all. An old man had lived here, but passed away, and it had gone by the wayside. There was a lot of preparation to get the farm even ready to be planted. It was a lot of work. It took all summer.”

Greg and Mira Melien, along with their daughter, Vali, pose next to one of the haskcap berry bushes in their farm’s field. In a few months, these bushes will be loaded with berries, which the couple plan to make into wine. Photo by Heidi Ulrichsen.
Mira said they chose the farm because of the rich silt loam field, which is “very unusual for the area.”

To further add to the field’s richness, Greg produces a “tea” from the family cow’s manure to spread on the fields as fertilizer.

Their berry bushes were all planted last fall. The bushes have already started to bud, and will soon be in full flower.

It would be difficult to grow grapes in northern Ontario because of the colder weather, the couple say.
Haskcap berry bushes, however, are hardy, and grow so fast that the Meliens expect to have their first harvest in June.

The berries, which have a raspberry/blueberry flavour, can be flowering at -7 C with no damage. The fruit is ideally suited to northern Ontario.

“The plants themselves are quite unique,” Greg said. “Typically, you don’t start planting until the first full moon of June. We plan to collect our berries by that time.”

The Meliens have planted the berry blue, indigo yum and borealis haskcap varieties.

They hope to have produced their first wines by this fall, producing both table wines and dessert wines, and selling them from the farm gate, instead of relying on the LCBO.

“We have a world-class wine maker named Dominic Rivard coming to help us with our wine-making process,” Greg said.

He said he plans to start constructing his winery building on the property in a few weeks. The building will be built using steel insulated panels, which have very high levels of insulation.

“Heating costs are going to be very minimal for us,” Greg said.

Haskcaps produce a “unique and flavourful” wine, Mira said. “We’re calling it the grape of the north,” she said.

They plan to sell 50 “shares” of what they produce to the general public. The shares, which cost $800 each, are enough to feed a family of four every week from the end of June until the beginning of October.

Some of the shares are still available for purchase.

“What that entails is 18 to 20 weeks of fresh, organically grown vegetables,” Greg said. The shares will include haskcap, sour cherry, Saskatoon, chokecherry and cranberry compotes, cordials and vinegars made on the farm.

The couple is looking into including fresh-laid eggs as part of the shares as well.

They encourage those who purchase their shares to come out to the farm each week so they can see how the food is grown.

However, he said he’s trying to arrange for the food to be dropped off in Sudbury and North Bay for those who can’t travel to the farm.

The family has also planted about two and a half acres worth of German Red Legacy garlic, which they say is a “rich, intense-tasting” variety with easily-peeled large cloves.

“It is starting to sprout,” Greg said. “In June we’ll have garlic scapes available, which are just delicious.

By late July into August we’ll be harvesting that garlic.”

For more information about the Boreal Berry Farm and Winery, email [email protected] 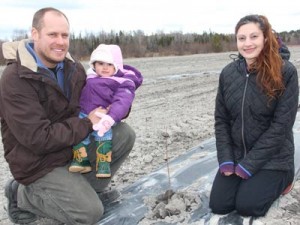