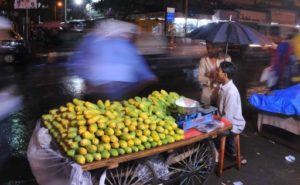 LUCKNOW, India — Researchers in northern India say they have developed a wine made from mangoes that they hope might one day compete with the traditional grape-based variety.

Scientists at the Central Institute of Subtropical Horticultural Research in Lucknow have produced wines using three types of mango native to the local state of Uttar Pradesh — the Dussehri, Langra, and Chausa.

India is the world’s largest mango producer and is home to nearly 1,000 varieties of the succulent and juicy fruit — something the researchers hope could be harnessed into a new drinks industry.

“We thought if France, Italy or Australia had made a mark for themselves as leaders in the wine industry, essentially because of their abundant grape produce, why don?t we try out our skills with the huge quantities of mango grown in this region?” Neelima Garg, who led the research team, told AFP.

“Just as each of the mango varieties taste different, each of the wines too varies in taste as well as in flavour,” added Garg, who has been working on the project for the past two years.

Indian mangoes come in all hues, shapes and sizes, from the the pale-fleshed Safedas, “the white ones,” or the deeper-toned, sweeter Chausa that can be sucked like a packaged drink.

The mango most familiar to overseas fans of the fruit is likely to be the the pricey Alphonso, which some Indians call the “king” among fruit.

The main problem researchers in Lucknow faced was treating the viscous mango pulp to make it thin enough to pass as wine.

“The process of fermentation is not very tough as mango contains huge quantities of sugar, which is the basic source of alcohol, but balancing the viscosity is what needs to be done very carefully,” she said. 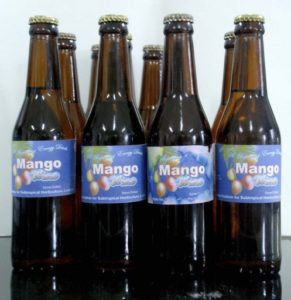 Alcohol content in the slightly yellow, sweet drink is 8.0-9.0 percent, lower than a typical wines made from grapes which generally range from 10-15 percent.

Wine is a relatively new entrant in the Indian alcohol market, which is dominated by whisky, but industry insiders expect consumption to rise exponentially, particularly in urban areas.

The main Indian wine-growing region is in the western and southern states of Maharastra and Karnataka, where the biggest domestic producers, Grover and Sula, are based.

They, like other smaller producers, have imported European technology and know-how as they develop into major producers for a domestic market that is still highly protected.

Imported wine is hit with heavy duties that can double the price of a bottle, making it difficult for low and medium-range New World and European producers to enter the enticing market.

“India has embarked on a wine adventure,” Kapil Grover, owner of Grover Wines, which has 165 hectares (410 acres) of vineyards in Karnataka, explained to AFP earlier this year.

Wine-tasting sessions and wine clubs are spreading through the cities.

Researchers in Lucknow and elsewhere are hoping that this adventure could include more exotic wines made from mangoes, blackberries or even apples.

Manish Kasture is part of a team of scientists based at the state-funded Dapoli University in western India.

He is applying for patents on wine made from cashew apples and blackberries. He also has a mango wine in the pipeline, but “it needs some fine-tuning,” he explained.

“Grape wine is available all over the world,” he said, “but these wines are healthier. They have antioxidants and vitamins.”

In Lucknow, institute director H. Ravishankar believes that it will “surely be a big draw with all fond of good liquor,” and hopes to ink a deal with a commercial wine producer.

“It is certainly feasible to make wine from mangoes,” he said. “The issue is the quality, flavour, spoilage and marketing. This will be a niche market at best and unless the basic wine market develops, there is not much scope.

“Himachal Pradesh (in northern India) already makes fruit wines and barring apple wine, others are barely drinkable — if at all.”