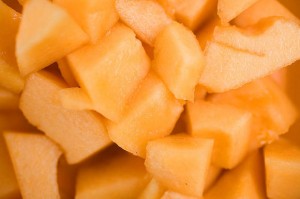 When life gives you cantaloupes, cantaloupe wine can’t be far behind.

A cheerful pourer named Tammy told us the story as we sipped one of Chateau Laurinda’s more flamboyant concoctions on a recent sunny autumn afternoon. We had ventured out of our vacation cabin in the hills near Sparta, close by the Virginia line, to the winery’s nearby tasting room.

Chateau Laurinda, Tammy said, prides itself on its fruit wine. The list read like a bag of Skittles: Blue Fox Blackberry, Heavenly Citrus, Banana Split, Blueberry Hill and, of course, Cantaloupe. The other flavors had been premeditated, but the cantaloupe was born of chance. A local farmer had found few takers for a batch of melons at market one Saturday. He took them to Chateau Laurinda hoping his neighbor could find a hole to bury them in. The winemaker’s imagination took over.

As bizarre as it sounds, the cantaloupe wine was light and refreshing, and it escaped the syrupy sweetness that plagued many of its Chateau Laurinda companions. But should you call it wine?

You couldn’t within the confines of the European Union. The authority upholds a strict definition for wine — that it be made from fermented grapes. Not everyone agrees, however. Whether it’s cantaloupes in the Blue Ridge or pomegranates in the Armenian Caucasus, just about any fruit can find a way to become wine if humans are willing to abet the cause.

“Wine is open to all fruits and actually some vegetables,” he says. “It’s a wide-open playing field.”

Payette is a Virginia winemaker and consultant with 25 years of winemaking experience on both coasts. He was one of the judges who last week sipped their way through 416 wines from 51 of the state’s wineries to award medals in the N.C. State Fair Wine Competition. In the fruit wine category, the judges awarded top honors to a blackberry wine from Sanctuary Vineyards in Currituck County. While wines made from fruit juice other than grapes are generally sweeter, judges assess them using the same measuring sticks.

In the case of Sanctuary Vineyards’ blackberry, Payette says the judges agreed that the wine was well balanced.

Sanctuary winemaker John Wright makes the wine with blackberry juice imported from out of state. He says the wine falls clearly in the dessert category because of its residual sugar.

“But the sweetness fools you because the acidity lifts it up,” he says. “It’s the acidity that saves it from being cloying.”

As in life, making good wine comes down to achieving the proper balance. It seems it’s true whether you start with Cabernet grapes, blackberry juice or even leftover cantaloupes.