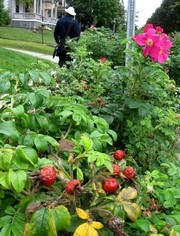 They’re tough; they’re salt-and-snow resistant — and they’re everywhere, free for the picking. This just might be a vintage year for rose hips, the red fruit that sets after a rose’s bloom.

Sarah Heusner, a Burlington resident and student of ethnobotony at the University of Vermont, wants to find out. She and classmate Pam Coggin investigated the rose hip’s medicinal and gastronomical history. They’re working on a recipe for rose hip wine.

“It’s a cool excuse to dive into this,” Heusner said last week.

She placed a “Seeking Rose Hips” message on the South Union Front Porch Forum, and she’s scouting locations, with Coggin, for free sources of the vitamin-C-rich fruit.

“The high cost of a college education has made us entrepreneurial,” she said. “It’s kind of like a scientific experiment. We’re learning from scratch, but we’re hoping maybe to get really good at this.”

Heusner and Coggin’s unfinished basement will become their laboratory this winter. There’s a good possibility they won’t limit their gleaning-and-fermenting operation to rose hips.

“We’ve found a lot of what people think of as ornamentals in their front yards; plants that are pretty when they flower — but they also have fruit that’s edible,” she said.

“Vermont just doesn’t grow great grapes for wine, so we’re just using stuff that’s local that grows well,” Heusner said. “It’s important for people to know that there are all these little treasures around town.”