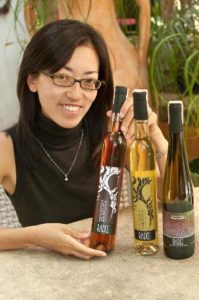 Meet 34-year-old local entrepreneur Makiko Yamashita from Kobe, Japan. Makiko has been living in the United States since 1999 and is freshly graduated from the Kellogg School of Management at Northwestern University in Chicago.

Traveling, business smarts and networking have inspired her to incorporate her exotic fruit wine business, Radee Wine, Inc. She is not only the first person to introduce the wine from Thailand to the United States and is the only distributor in the country—she has brought the exotic potion right here to Sacramento.

Yamashita incorporated Radee in August. However, she said she just received her first shipment of the products and began operating just over two weeks ago. As of last week, she said Tower Cafe, Kru, Azul, the Cellar Wine and Cheese Bar in Folsom and Corti Brothers Italian grocery store are now carrying Radee wine.

Yamashita had been studying at Kellogg until last year and said she was especially interested in social entrepreneurship and economic development. Her interest led her to participate in a 2007 summer internship with the NGO One Acre Fund in western Kenya managing a passion fruit-growing program with farmers.

“That’s where I first really got to know passion fruits, and I loved it…It’s hard to get in the U.S., but I wanted to do something with those fruits,” she said.

In December, 2007, she embarked on an exchange program to Bangkok, Thailand, where she met Dominic Rivard—a French Canadian winemaker and founding director of the Fruit Wines of Canada Association—through her business professor. Rivard is an award-winning winemaker with more than 15 years of experience in Canada, the United States, Italy, Korea and China, and moved to Thailand to make exotic tropical fruit wines, according to Yamashita.

Yamashita seized the opportunity to introduce Rivard’s wine to the United States, and before graduating from Kellogg in June, Yamashita created her business plan to import and sell Rivard’s wine in conjunction with her graduate work.

“We kind of partnered up. He knows how to make good wine, and I know how to make business plans,” Yamashita said. “We were both really excited about this new concept and these new products.”

After graduating from Kellogg, Yamashita moved to Sacramento last year with her fiancée and incorporated Radee wine.
As she states on her website, “Radee means ‘passion’ in Thai. Radee is our passion to transform a variety of delightful exotic fruits into distinctive and exquisite wine.”

So far Yamashita has imported three kinds of fruit wine from Rivard’s winery in Thailand: mangosteen ambrosia, pineapple ambrosia and passion fruit. The wines are sold at $25 to $35 retail. In her future shipments she hopes to import dry mangosteen and dry pineapple, as well as a sweet lychee wine.

According to Yamashita, mangosteen ambrosia is the most sophisticated of the three wines due to the fruit’s delicate flavor. She said that although fresh mangosteen, also known as the “Queen of Fruit” in India, is common in Southeast Asia, it is difficult to grow anywhere else, making it otherwise a very rare fruit. Yamashita also said the fruit is perceived to have antioxidant properties. 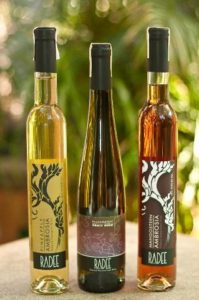 The pineapple ambrosia, Yamashita said, is “so obviously pineapple that when you smell it you know it,” and is nicknamed “pineapple lover.” Since Azul is a Mexican food and tequila bar, she said she is trying to promote a mixture of the wine with tequila.

While mangosteen ambrosia and pineapple ambrosia are sweet dessert wines, Yamashita said the passion fruit wine is drier and the most exotic. She described it as sweet with a strong taste of citrus and said it mixes well with sparkling wine.

Yamashita said those who have sampled Radee wine so far “loved it.”

“It’s sweet so people who like fruity types of wine love it…but its not syrupy so it finishes really smoothly,” she said.

“I was especially anxious about Darrell Corti [co-owner of Corti Brothers] because he knows wine. But he said it’s a great flavor; he likes it a lot,” she added.

As of Friday, Azul co-owner Jose Ulloa estimated that the bar had already gone through five bottles of passion fruit and two bottles each of mangosteen ambrosia and pineapple ambrosia.

Yamashita intends to travel to the Bay Area and southern California in the next few weeks to introduce the wine. In five years, she said she wants to go to the major cities like New York, Chicago and Los Angeles to sell Radee wine. She hopes to also eventually sell it in wine bars with retail stores and possibly create an online purchasing system.

“This is a new concept. It’s high-quality premium wine but not many people take fruit [wine] that seriously…[because] wine means grape wine,” Yamashita said, adding that she plans to focus on clientele who are interested in Asian fusion and are “eclectic, diverse groups of people.”

“Potential customers have to open up a little bit,” Yamashita declared with a smile. “They don’t have to like it, but I hope they will at least try it.”

Rivard began producing exotic fruit wine in Thailand last year and uses all locally produced fruit near Bangkok to make the wine, according to Yamashita.

Although the exact technique Rivard uses in making Radee wine is a trade secret, Yamashita said he applies techniques similar to those used for ice wine, a type of dessert wine mainly made in Canada and Germany that he also specializes in.

Yamashita said she is also looking into producing fair trade wine in the future.

Yamashita is participating in two wine tasting events this upcoming week. She will be providing samples Tuesday, May 12, at The Cellar Wine and Cheese Bar from 6-8 p.m., and Wednesday, May 13, at Selland’s on H Street from 6-8 p.m.

For more information about Radee wine and the company, visit www.radeewine.com