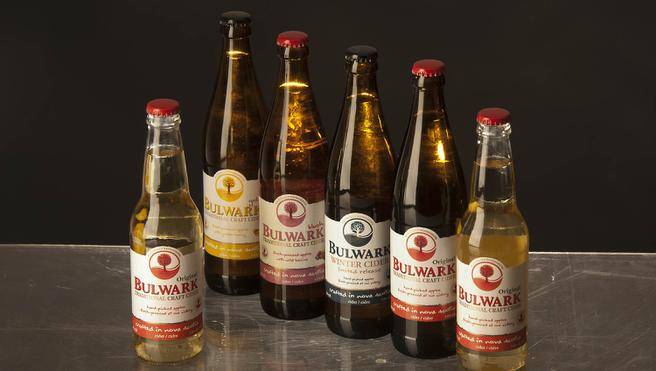 With the fast growing interest in hard cider, as well as daily consumption of healthy products such as apple cider vinegar, its great to see articles out there talking about any “apple” which of course I am a big fan of.

This is a nice “feel good” article on the rise of apple cider in Atlantic Canada. I love articles like this.

Written by Bill Spurr of the Chronical Harold in Halifax, Nova Scotia, it’s worth sharing. Read on….

This past week, Dominic Rivard might have thought a little more often about the palm trees in his former home of Thailand than he usually does. But, as a rule, he’s happier living in New Ross than he was in Bangkok.

“That’s a great place to vacation; this is a better place to run a business,” saysi Rivard, owner/winemaker at Muwin Estate Wines, best known for its Bulwark Ciders.

Bulwark dominates the local cider market, and cider puts a smile on the faces of the bookkeepers at the Nova Scotia Liquor Corp., with sales increasing 146 per cent from 2013 to ’14, after jumping 95 per cent the year before.

“The rise in cider consumption has been meteoric, quite exceptional,” said Mike Maloney, in external communications for the NSLC.

“There are a few reasons: one is that it’s gluten-free so it’s a good alternative to beer, there’s the ‘buy local’ movement and just the fact that tastes are cyclical. Cider has been around forever, but it’s back in style now.”

This past summer alone, liquor store sales in a sector that also includes Tideview, Stutz, Shipbuilder and L’Acadie totalled $400,000.

The majority of that is from Bulwark, where a $300,000 bottling line imported from Italy to New Ross can fill 3,000 bottles an hour. Even at that speed, demand almost outstrips supply.

“We’re blending five varieties of apples so it’s a constant fight to find them,” said Rivard.

“There’s no shortage of apples, but getting the juice apples is more difficult. What we’re fighting for all the time is to get the tannic varieties like the russets or the orange pippins, which bring your cider to the next level in terms of quality. (Many) of them have been pulled down and replaced with commercial varieties like Honeycrisp or SweeTango, all these trendy apples, so the good cider apples are harder to get.”

All the apples in Bulwark’s ciders are from Nova Scotia, just like the cranberries, raspberries and blueberries added to the Blush variety that started out as a one-time offering but proved so popular it became an NSLC general listing. Some of the berries are grown on the 40 hectares that take in the Bulwark processing plant, which can brew a million litres of cider a year and where the apple press includes a section called a squeeze box.

The work area isn’t as pretty as at the wineries half an hour away in the Gaspereau Valley, but it’s very busy.

“The thing about cider, things happen much quicker so you have to be able to adapt and adjust and react quicker than you would with wine; if you’re doing a white wine, you have six to nine months to deal with it … where with cider it’s a six-week cycle,” said Rivard, also noting the difference in price of the raw product.

“Your average ton of grapes in Nova Scotia is about $1,500, while a bin of juice apples is about 60 bucks, with about four bins per ton, so it’s a lot cheaper.”

With the Traditional and Blush varieties flying off the shelves, Bulwark has brought back its Winter cider for a second season and, a month ago, introduced Gold, created by cider maker Jay Hildybrant.

“It’s a slightly sweeter cider, fermented with specialty yeast and enzymes to be able to bring out tropical notes,” Rivard said.

“The Winter cider, we make sure the apples are the sweetest ones, that’s why you get a higher alcohol level.

Also, we infuse spice in that cider — ginger, cinnamon and nutmeg — and those infusions give almost a mulled wine flavour and the higher alcohol gives a warm feeling, so it’s a good winter cider.”

Even though the province’s cider makers are competing for the same customers, there’s a sense of camaraderie in the nascent industry. Bulwark even bottles the products of a few other cider makers from elsewhere in Nova Scotia and in New Brunswick.

“There aren’t very many of us, but we actually connect very well with the craft beer industry,” said Gabrielle Pope, Bulwark’s chief marketer.

“We’re friends with Propeller and people like that, we’re a little bit more in that world. We do the same kinds of events that they do.”

Bulwark sends dozens of kegs each week to its network of about 40 bars and restaurants that sell its ciders on tap. More than a third of the company’s business is from exports of fruit wines and ciders to Asia, and Bulwark is about to enter the United Kingdom, which consumes 70 per cent of the world’s cider.

Even if the increased business means the gravel employee parking lot has to be enlarged, Pope said the one position they’re not looking to fill is that of tour guide.