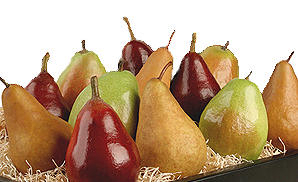 Article by By JOHN SCHMITZ For the Capital Press

When ornamental nurseryman Scott Hagee left Southern California 30 years ago to become an orchardist in the Columbia River Gorge, little did he know that he would some day be making a unique wine.

What makes Pheasant Valley pear wine unique is that it contains very little residual sugar, about 1.5 to 2.5 percent.
“Most of the time when you think of fruit wines you think of something really sweet and syrupy, and it’s not that at all,” said Amanda Williams, wine club coordinator. “It’s very food-friendly and has this incredible nose of just pear.”

Of the three pear varieties he grows — Bartlett, Bosc and Anjou — Hagee went with Bartletts. “I find them to be the sweetest of the bunch.”
Williams said pear wine sales have been “excellent” and still growing.

“Every year we try and make more because we always sell out of it,” Williams said. “I’m not sure if we’re going to make it though the summer, as usual.”
“It’s real popular. We just can’t make enough of it,” Hagee said.

The Pheasant Valley Bartlett pear harvest takes place in mid-August. After being juiced in Hood River, the pear juice is filtered at the winery and then fermented for about six weeks before being bottled and marketed.

Typically, a portion of the juice each year is frozen and then thawed and fermented later on the following year.
Hagee, who is also the pear winemaker and orchard manager, uses the same yeast cultures and fermentation process that are used in making his white wines.
Pheasant Valley pears are grown on standard trees that require 12-foot ladders for picking.

Hagee said that growing pears organically is a challenge.

“The coddling moth is our big issue,” he said. “We use mating disruption and several biological viruses we spray on a 10-day basis when the coddling moth eggs begin to hatch.”

Eighty percent of Pheasant Valley’s pear wine sales take place in the winery’s tasting room.
While Hagee has won several awards and high ratings for his vinifera wines, “there are not a lot of fruit wine contests … that’s for sure,” he said.
Hagee said that the processed pear industry is down but that fresh markets, “especially organics,” are “doing fine.”

Pheasant Valley pear wines are available at several regional retail outlets, including New Seasons in Portland and Roth’s in the Willamette Valley.