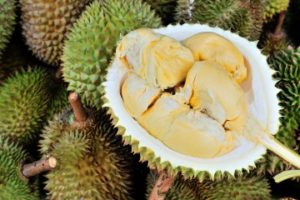 I never thought I would see this but durian is now turned into wine. Below is an interesting article I found written by Jenifer Cheng. Hope I can come across this wine one of these days as I would certainly like to try it. Enjoy!

A popular expression to describe durian’s creamy yellow hued flesh: it tastes like heaven but smells like hell.

Known as the king of fruits, the spiky delicacy has such a pungent smell that it is often barred from public places. But it boasts a loyal legion of fans who can consume the creamy yellow flesh by itself or in candy, pancakes or chips. There will soon be another option: wine.

Just in time for this year’s durian season, a research group at the National University of Singapore’s Food Science and Technology Program has announced that it has cultivated a clear durian wine with 6% alcohol. After three years of intensive research, the team is now looking for commercial partners to sell the beverage.

Fransisca Taniasuri, a student involved in the project, told Reuters: “For durian lovers it will be an interesting product to try because they love durian in the first place, like myself. For the non–durian lovers, actually after the fermentation, the pungent smell, the repulsive smell of durian are reduced considerably, so actually they will dare to try.”

Although the durian is rich in calories like avocado, it contains a higher level of antioxidants when ripe compared with guava or mango, according to a 2007 study by the Swiss Society of Food Science and Technology. The British Library writes that the durian is also rich in vitamins B, C and E, as well as in iron content. In Malaysia, some use the leaves for medicinal purposes in healing fevers or jaundice.

However, past accidents have generated belief that durian consumed with alcohol could result in fatal cardiac arrest. Liu Shaoquan, assistant professor at the NUS Food Science and Technology Programme, dispelled worries by telling Channel NewsAsia: “Indeed there’s such a belief. Recent study has shown that it is the sulphur compounds in the durian that caused the potential fatal incident. And actually after fermentation, the sulphur compounds are reduced significantly to the trace levels, therefore there should not be any safety issues.”

Those not brave enough to stomach durian wine might consider papaya wine, which the team has also been cultivating over the past five years and expects to be more widely accepted.