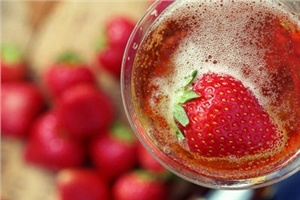 Ask the average wine drinker what they think of wine made from fruit other than grapes and the responses are typically:

“Not made properly.” and perhaps most telling,

“Fruit wine is a curiosity for hobbyists – nothing more.”

Fruit wine makers however, have a different story.

From strawberries and raspberries to nectarines, peaches and even rhubarb, an increasing number of winemakers are using often discarded fruit to create an alternative beverage.

In Queensland, tropical fruit such as mango is popular.

In the Yarra Valley it’s kiwifruit.

“I see the change at the events we attend (such as harvest picnics, Royal Melbourne Show, farmers’ markets),” she said.

“People are prepared to taste the wine – they’re more adventurous and open minded.

“Five years ago it was not seen as having a good palate to ask for sweet wine.

“But not all our wine is sweet, that is a misconception.

“People assume it’s going to be and they’re agreeably surprised when it’s not.”

For Matt Gallace of Sunnyridge Strawberry Farm on the Mornington Peninsula, fruit-wine production began as a way to use excess strawberries.

Since 1997, the Gallace family has produced liqueurs and wines.

A Federal Government grant in 2006 enabled the expansion of the farm’s wine production, now made at Rebello winery.

In contrast to the syrupy sweetness of the sparkling, the strawbellini is subtle tasting and very easy to drink.

“We’re marketing to a niche, I suppose, of younger females aged 20 to mid 30s,” says Gallace.

Usually, customers are comprised of tourists visiting the farm.

But Gallace says the market is expanding.

A redesign of the bottles’ labels also appeals to the wine-drinking market.

The sweet wines are stocked locally in bottle shops and are best paired with desserts and cheese, says winery director Cheryl Parry.

At this year’s Australian Fruit Wine Show in Tasmania, a record 214 non-grape wines were entered.

At the judging of the Victorian Wine Show in October, where thousands of bottles of shiraz, cabernet sauvignon, table whites and sparklings were entered, an amateur class was also available to non-commercial winemakers.

In this class, the non-grape section attracts small but regular entries.

This year judges tasted fig and mango wine, in years past, it was lemongrass and marjoram.

Admittedly, they say, some have been undrinkable.

Rhuby, a sparkling wine made from rhubarb, has won several awards at the show.

Its maker, Bruce Hawksworth, has applied for a licence to sell it commercially, and may prove naysayers wrong.

A combustion engineer by day, winemaking has been a hobby for Hawksworth, who enrolled in a course near work in Knoxfield 15 years ago.

Remembering a rhubarb wine his mother made when he was a boy, he requested the recipe.

“It is very much like a champagne, even though I know we’re not supposed to use that word,” he says.

Made in the methode champagne, rhuby is vibrant pink and quite dry, with a light, refreshing rhubarb flavour.

“It’s a wine to drink while sitting on the balcony in the afternoon sun and it matches very well with roast chicken,” he says.

Hawksworth was encouraged to apply for a licence by friends and associates in his class.

“They’re actually not, because there’s a lot of ferment characters that can be released in producing these wines ” she says.