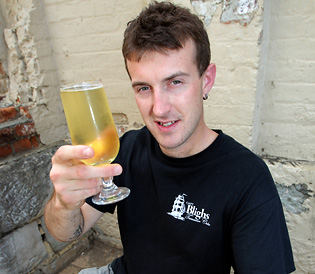 Cider sales are in full growth all over the world. In many parts, its the fastest growing alcoholic beverage in terms of market growth.

I love these stories! Read on! Great story by Charles Waterhouse of the The Mercury in Tasmania, Australia.

TASMANIA’S moniker as the Apple Isle has taken on a whole new meaning with growing alcoholic cider sales, and it is having some interesting consequences.

At a time when Australian premium beer sales have plunged, international premiums, and cider in particular, have been filling the void.

Mr Osborne said he started his venture because Tasmania was a huge producer of apples and it still did not have a cider industry, and he liked to drink cider.

Tasmania already has quite a number of craft cider producers.

Some have spun off cider making from producing craft beers, including the Two Metre Tall Company in the Derwent Valley and winemakers like Holm Oak in the Tamar Valley.

Jane Huntington, co-owner and general manager of the Two Metre Tall Company, said you only needed to walk into a bottle shop to see the explosion of cider brands from New Zealand and across Australia.

“We knew there was a demand and we had a request from a mainland distributor because he could see huge interest in the market.”

Mrs Huntington said cider was treated the same way as wine tax-wise, which was a much easier environment than beer, making it much easier for cider producers.

The business she and her husband ran was reaching a point where the output of beer and cider was almost equal.

A Nielsen survey shows that in the 12 months to last November international premium beer sales such as Corona were up 12.7 per cent.

At the same time, domestic premium beers had dropped 11.2 per cent – and cider sales surged 53 per cent.

“We are still a nation of beer drinkers by a longshot,” he said.