This is the season when food and wine articles in the national media suggest that the advent of colder weather calls for seasonal dishes (daubes, pork roasts, apple desserts) and richer, heftier wines (Zinfandel, Barolo, Port) to stave off winter’s chill. True, except that our version of “chill” can be downright temperate; before heading to the farmers market and the wine shop, I sometimes still have to slather on sunblock and grab my wide-brimmed hat. Such is the disconnect at this time of year, when instincts and habits tell us to braise lamb shanks and pull out the Cabernet, but the Southern California weather often refuses to cooperate.

There is a beverage that suits our local version of the season, though, combining the traditional flavors of fall with the refreshment and lightness of beer, and that’s cider. Not the chilled, brownish-colored stuff from the supermarket, but alcoholic or “hard” cider. Hard cider is made from fermented apple or pear juice or, in the case of some large-production brands, juice concentrate, and the finished product has an alcohol content ranging from about 3% to 8%. 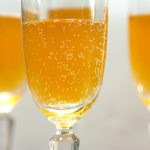 Most mass-market hard ciders are not very interesting, but a select number of producers are using artisanal techniques and varieties of fruit bred specifically for cider, yielding juice with higher acidity and tannins, which makes a well-structured drink with the complexity and depth of a fine microbrew.

Since the flavor of lighter ciders is akin to off-dry white wines or sparklers, they make ideal aperitifs, brunch drinks or simply to savor on their own. Sweeter, richer ciders are terrific with cheese or apple pie.

Distinguishing a quality artisanal cider from a commercial, large-production bottling is easier than it might seem. Price is one indicator; better ciders usually cost upward of $10 for a 750-milliliter bottle, and some are $20 or more. But the ingredients’ list tells the real story. Here’s one from a popular pear cider made in the U.K.: pear wine, water, high fructose corn syrup, carbon dioxide, caramel color, citric acid, sodium metabisulfate (to preserve freshness).

Contrast that with the ingredients list from a bottle of cider produced by Wandering Aengus Ciderworks of Salem, Ore.: fermented apple juice from certified organic cider apples. Which would you rather drink?

Quality hard cider has a cultish following in Europe, particularly in France’s Normandy region and in the U.K., where pubs offer cider on draft along with ales and lagers. It’s also popular in apple-growing regions of the U.S., such as New England, New York and the Pacific Northwest.

But in Los Angeles, cider tends to be the poor stepchild. Since it’s not wine or beer, few retailers pay it much attention. I asked the manager of one wine shop how many ciders he carried. “We don’t have any,” he said with a shrug. On my way out, I decided to check the beer section for nonexistent ciders. There, right up front, was a nice little selection.

I recently sampled 22 hard ciders, apple and pear, available at local retailers. Many were eminently forgettable or actually unpleasant, but I did find several terrific examples. Here are four producers to seek out (buying information in sidebar):

Eric Bordelet was a sommelier at l’Arpège, a Michelin three-star restaurant in Paris, in 1992 when he decided to return to his roots, quite literally, and manage his family’s orchards in Normandy. Bordelet brings a wine sensibility and a commitment to organic and biodynamic farming to the production of apple and pear ciders.

His Sidre Doux, with an alcohol content of 4%, is styled like a lightly sweet, toffee-scented, apple-y dessert wine. Bordelet’s Poiré Authentique is a fresh-tasting, blossom-scented pear cider, while his top-of-the-line Poiré Granit, made from the fruit of 300-year-old trees, is more vinous, with complex aromas of pear skin and spice. Note that these ciders are vintage-dated and that the year is printed on top of the cork.

Manoir du Parc is another Norman product, this one from an estate called La Brique in St. Joseph, on the Cotentin peninsula. Manoir du Parc produces a well-regarded apple cider, but locally, I have found only the Poiré, a superb example in a light-bodied style (3% alcohol) with aromas of ripe pears and clean, refreshing flavors.

Wandering Aengus Ciderworks is owned by Mimi Casteel and Nick Gunn, who got into the cider business about four years ago (Casteel’s parents own the neighboring Bethel Heights Winery). Casteel and Gunn use artisanal methods and traditional varieties of cider apples to produce three ciders, the most appealing of which is Heirloom Blend, a sweet drink with a tart acidic backbone that’s like biting into a dead-ripe, fragrant apple.

The semi-dry is more austere and wine-like, with fresh, juicy flavors. The dry cider is too dry for my taste; the naturally strong acidity of the cider tastes sour without a counterbalancing sweetness.

J.K. Scrumpy sounds like a cutesy name created during a 1960s ad agency brainstorming session, but it actually is an authentic, organic farmhouse cider produced by the Koan family of Almar Orchard in Flushing, Mich., about an hour north of Detroit.

“Scrumpy” is a British term for a rustic style of cider, and “J.K.” stands for Jim and Karen Koan, the proprietors, who produce just one bottling, a robust, unfiltered, sweet drink with a 5.5% alcohol content and the crisp taste of fresh apple cider.

This style of cider takes well to mulling (heating with mulling spices), so keep some on hand for when those fiercely cold winter storms move into the Southland.