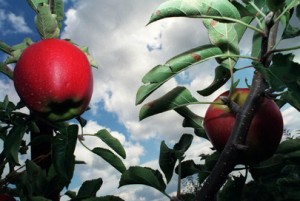 By Dana Flavelle, Business Reporter for the Toronto Star

Local fruit growers need to do a better job if they want to compete with cheaper imports, says a $1.2 million report commissioned by the federal and Ontario governments.

The study, to be released Wednesday, says Ontario’s fruit farmers have a huge opportunity to meet rising consumer demand for locally grown produce.

But many local farms are small, inefficient and out-of-date, making it difficult for them to compete on price, the study by consulting firm Deloitte say.

Among other things, Ontario farmers need to consolidate more of their operations, hire marketing experts from the consumer packaged goods industry to help develop and promote their products, and focus more on high-value niche markets, such as organic fruit, the report concludes.

“An industry strategy is needed because while fruit consumption in Ontario is increasing, Ontario producers’ market share is declining,” the study says.

The report, called a Fifteen Year Comprehensive Strategic Plan for the Ontario Apple, Tender Fruit and Fresh Grape Industry, arises out of the devastating closure in June 2008 of CanGro, the last of 32 fruit canning plants in Ontario.

Commissioned as part of the Ontario Orchard and Vineland transition strategy, it lays out a blueprint for helping farmers move from lower-cost fruit for canning to higher-value fresh fruit to meet rising demand in supermarkets.

Among other things, it calls on farmers to develop new varieties, improve their cooling, storing and packing techniques, and become smarter marketers.

Donald Ziraldo, chair of the Vineland Research and Innovation Centre, which oversaw the study, says local fruit farmers need to do for their industry what he and other vintners did for the Niagara wine industry over the last 20 years.

“I had the pleasure of being involved with an industry that went from selling Baby Duck to internationally acclaimed ice wine at $52 a bottle,” said Ziraldo, a co-founder of Niagara’s Inniskillin winery. “There’s no reason we can’t do that in the fruit industry. If we don’t we’ll be gone in a decade.”

Local farmers said they agree they need to change, but some took offence at the report’s critical tone, saying the fault also lies with government policies that have raised producers’ costs.

“It makes me a little mad that the farmers are being focused on,” said Brian Gilroy, chair of the Ontario Apple Growers, adding that changes in the retail industry are partly to blame.

“There’s been a huge change in the grocery store,” he said. “We have access to produce from around the world. You can get Peruvian Asparagus for $1.49 a pound. Our costs are $2.”

“Our industry does have to do something or we’re in trouble, there’s no doubt about it,” said Len Troup, chairman if the Ontario Tender Fruit Growers Association. “We’re being eaten up every year not just on the sales side but also the cost side.”

Ontario’s minimum wage has jumped 28 per cent in three years, while a falling US dollar has made imports 20 per cent cheaper, Troup says.

Supermarket chains, faced with stiff competition from Wal-mart’s entry into the fresh food business, won’t pass on those cost increases to consumers, farmers say. “They have absolute power over us.

“The things we know we need to do we can’t afford to do because our profit has all been sucked out by things beyond our control,” Troup said. “And we’ve been told we can’t use this report to ask for more government funding.”

Apple acreage has plunged by more than half in the last decade, said Gilroy, yet Ontario has no program to help farmers replant new varieties. An acre of apple trees costs $20,000 to replant and takes three years to produce the first fruit.

But Ziraldo said he has high hopes for the industry’s chances of working together to create world-class products.

Big supermarket chains like Loblaw now feature local growers in their advertising, Zirlaldo noted. And producers are learning how to meet retailers’ needs for more than the same quart basket sold in every store, he added.

Research shows shoppers won’t pay a premium for Ontario fruit, he added. So farmers will have to become more efficient and more attuned to consumers’ needs.