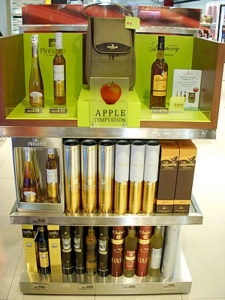 The Summit Selection has had an “extremely successful” year in duty free, the company said. Sales in 2010 have doubled over the previous year, with business for both still and sparkling versions increasing significantly.

The ice apple wine category has grown rapidly since Domaine Pinnacle’s inception just 10 years ago. Today, some 80% of duty free sales for the range are through Asia, with leading markets in Hong Kong, Taiwan, Thailand and China. “Sales through these four countries have been extremely buoyant over the past year and we’ve seen significant increases in sales,” said Camus Wines & Spirits Marketing Director Pascale Dubos.

The Apple Temptation concept merchandises the two different regional apple-based drinks alongside each other.

However, Dubos added, sales are also beginning to develop outside Asia with notable success in the US and Qatar: “Sales in the West have improved by 2.5 times with demand for both the still and sparkling versions, which is very satisfying.”

The Summit Selection is produced from a complementary blend of naturally frozen Cortland and Empire apples, hand-picked in orchards near the summit of Pinnacle Mountain.

Calvados has been distilled from locally grown apples in France’s historic region of Normandy for at least five centuries. Long popular with consumers in Scandinavia and Western Europe, Calvados is relatively new to many markets, particularly in the Asia Pacific region.

Dubos continued: “The Apple Temptation concept is resonating with more and more consumers around the world. The apple is by far the world’s most widely consumed fruit, but up to this point it has been largely and inexplicably absent from the product offerings of major wine and spirits producers.

“We’re finding that consumers are delighted to discover one of their favourite flavours in a whole new light. When something as common as the apple becomes so refined and so extraordinary, people naturally get excited. One taste and they’re more than tempted – they’re convinced,” Dubos enthused.