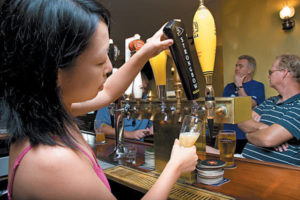 A very interesting article by Anne Spiselman of chicagobusiness.com about the red hot growth and popularity of cider in Chicago area bars and restaurants. Its worth taking notice of what is now happening in the cider industry! Read on:

Popularity of Cider is Growing

Five years ago, you’d have been hard-pressed to find cider at a local bar or restaurant. Today it’s unusual not to.
Many, such as the Publican, SmallBar Division and City Winery, dedicate at least one tap to ciders and offer several in bottles, ranging from Midwestern favorites like Vander Mill and J.K’s Scrumpy to selections from England and beyond. Barcito, adjacent to Tavernita, highlights five Spanish and French ciders by the glass or bottle. At El’s Kitchen & Bar, you can sample 10 ciders in bottles from a rotating repertoire of 20.

Cider is the smallest player in the beer industry (accounting for less than half a percent of the total in gallons), but last year it posted the biggest gains: 31.3 percent compared with 11.2 percent for craft beer, according to Chicago-based Technomic Inc. The first Cider Summit at Navy Pier, on Feb. 9, drew 2,000 fans, twice the number expected, said Alan Shapiro, president of the event’s producer, Seattle-based SBS Imports. CiderCon, a trade show Feb. 6-8 at the Allegro Chicago Hotel, brought together 240 growers and producers, including Prima Cider in Long Grove, which started selling ciders in 2011, and Fox Valley Winery, which added cider in 2012.

Humberto Martinez Jr., owner of Timothy O’Toole’s Pub in Streeterville, said cider sales have soared 500 percent in the last 18 months. The pub carries three draft ciders and eight in bottles. Like “wine coolers 15 years ago, but here to stay,” he said, cider is easy to drink, perfect for light drinkers and popular with women. It’s 3 percent to 8.5 percent alcohol by volume (but no more than 7 percent if made in the U.S.) and gluten-free. Mr. Martinez plans to increase his ciders on tap to four or five and his bottle list to 20. He also has scheduled a Cider Fest for late June, during which 30 of his 48 taps will be given over to ciders from at least 15 companies, and food pairings will be on hand.

Cider’s food-friendliness has prompted numerous tastings and special events typified by a Feb. 22 dinner at 2 Sparrows on Diversey Parkway in Lakeview, which paired four courses with three ciders from Virtue Cider, made in Fennville, Michigan: RedStreak, Lapinette and the Mitten. Virtue Cider founder Greg Hall, who’s doing for cider what he did for craft beer when he was brewmaster at Goose Island, said that cider really is more like wine, because it depends on the annual harvest and quality of the fruit.

His cider production grew from 24,000 gallons in 2011 to more than 100,000 in 2012. This year, he’s expanding to both coasts and introducing two new ciders, Normandy-style Percheron (named for a draft horse) and English-style West Cider. He’s also collaborating with local chefs, starting with Stephanie Izard and Paul Kahan, to produce special small-batch ciders that will be available only at their restaurants and his cider house in Fennville, Mich.

While Mr. Hall’s ciders are sold at 60 Chicago bars and restaurants (he’s capped it at that number for the time being), he — like everyone else — is waiting for someone to open a tavern dedicated just to cider. Mr. Martinez, for one, is mulling over the idea.

2 thoughts to “The Popularity of Cider is Growing Fast!”